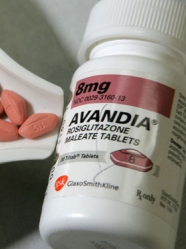 On June 5 and 6, an FDA advisory panel voted in favor of modifying the current Risk Evaluation and Modification Strategy (REMS), for GlaxoSmithKline’s (GSK) Avandia (rosiglitazone), a thiazolidinedione (TZD). The advisory panel met to reevaluate the REMS, or the rules for who can take the drug, and give a recommendation on if they should be relaxed. The 26-member panel discussed the Duke Clinical Research Institute’s (DCRI) analysis of the data from GSK’s Rosiglitazone Evaluated for Cardiac Outcomes and Regulation of Glycemia in Diabetes (RECORD) trial, a study that looked at the risk of heart disease related to taking Avandia. Their final vote reflected the huge diversity of opinions surrounding this topic. Half of the panel voted to loosen the existing REMS, seven voted to remove the REMS entirely, five voted to keep the REMS as currently written, and one person voted to withdraw Avandia from the market completely. The FDA will now make the final decision on how Avandia usage should be regulated moving forward.

As a reminder, Avandia was an extremely popular medication for type 2 diabetes until 2007, when a provocative study linked the drug with a 40% increased risk of heart attack. In 2009, GSK held the RECORD trial, which studied Avandia’s link to cardiovascular risk. The results showed that Avandia use does not increase the risk of heart disease. However, the FDA did not believe the results were completely reliable and recommended that GSK choose an independent body to reevaluate RECORD’s data. While the DCRI investigated the RECORD trial’s data, the FDA applied a REMS for Avandia, restricting who could be prescribed the drug.

It’s not entirely clear why this meeting was held now, as GSK’s patent on Avandia expired in 2011 and only about 3,000 people still use the drug. Possibly, the reason was to justify the previous actions of the FDA. There will likely be few practical changes for Avandia as a result of this meeting, but it does reaffirm that Avandia can still be useful to a small subset of people with type 2 diabetes.

Since the drug’s future isn’t in question, the panelists had a rare opportunity to discuss past mistakes in clinical trial design and the FDA’s overarching approach to cardiovascular safety issues. Indeed, the RECORD trial’s unclear results prompted the FDA to create its 2008 cardiovascular safety guidelines for diabetes drugs, requiring companies to show in a large, expensive separate trial that antihyperglycemic drugs are safe for the heart. Since most panelists believe that Avandia is safer than previously thought, and now that the initial study has itself been called into question, the issue is whether the FDA should reassess their guidelines. If they did, it would likely make it easier for new diabetes drugs to come to market and bring the US more in line with the European system.

These are major issues that require expert discussion but most of the meeting was squarely on Avandia’s safety profile, so this discussion is very much in its infancy. We are optimistic that this advisory panel meeting will eventually spark the debate that these cardiovascular safety issues deserve. –AW/MN/JD